Happy Friday, guys! No long no blog, but it’s officially summer, which means summer reading season is on. Which means I should probably catch up on my mini-book reviews. Let’s get the weekend (and summer) started with some book reviews in fifteen words or fewer.

Cress by Marissa Meyer
Great continuation of the Lunar Chronicles and a fun adaptation of Rapunzel.

Equal Rites by Terry Pratchett
Loved getting to see early Granny Weatherwax. Eskarina is a proto-Hermione in the best way.

We Should All Be Feminists by Chimamanda Ngozi Adichie
Hell yes we should! Required reading for all genders.

Attention Maine book enthusiasts! This weekend I’ll be at the Cape Elizabeth Author Fest with more than 80 other fellow authors, meeting educators and librarians and book fans of all ages. The details:

Seriously, check out all the authors coming–it’s a great line-up, and I’m psyched to be part of it.

Check out the Author Fest 2016 Facebook page for more info and updates. Hope to see you on Saturday!

New England’s a great place to be a children’s/YA author. We have a fantastic network of enthusiastic readers, booksellers, educators, librarians and fellow writers; we’re the kind of people who show up for book events even during a winter of 100+ inches of snow.

So what better place than to read local? New England educators, librarians, and readers, take the Read Local Challenge! 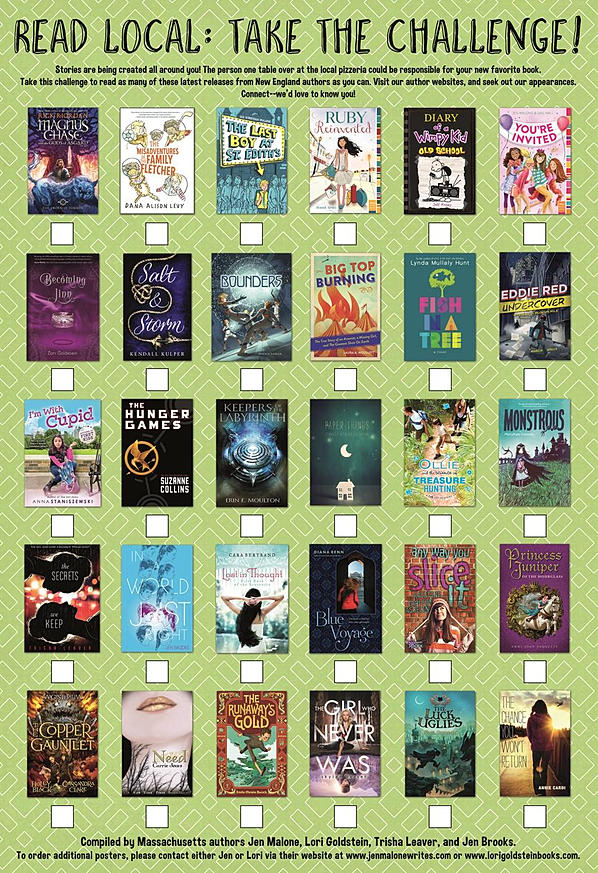 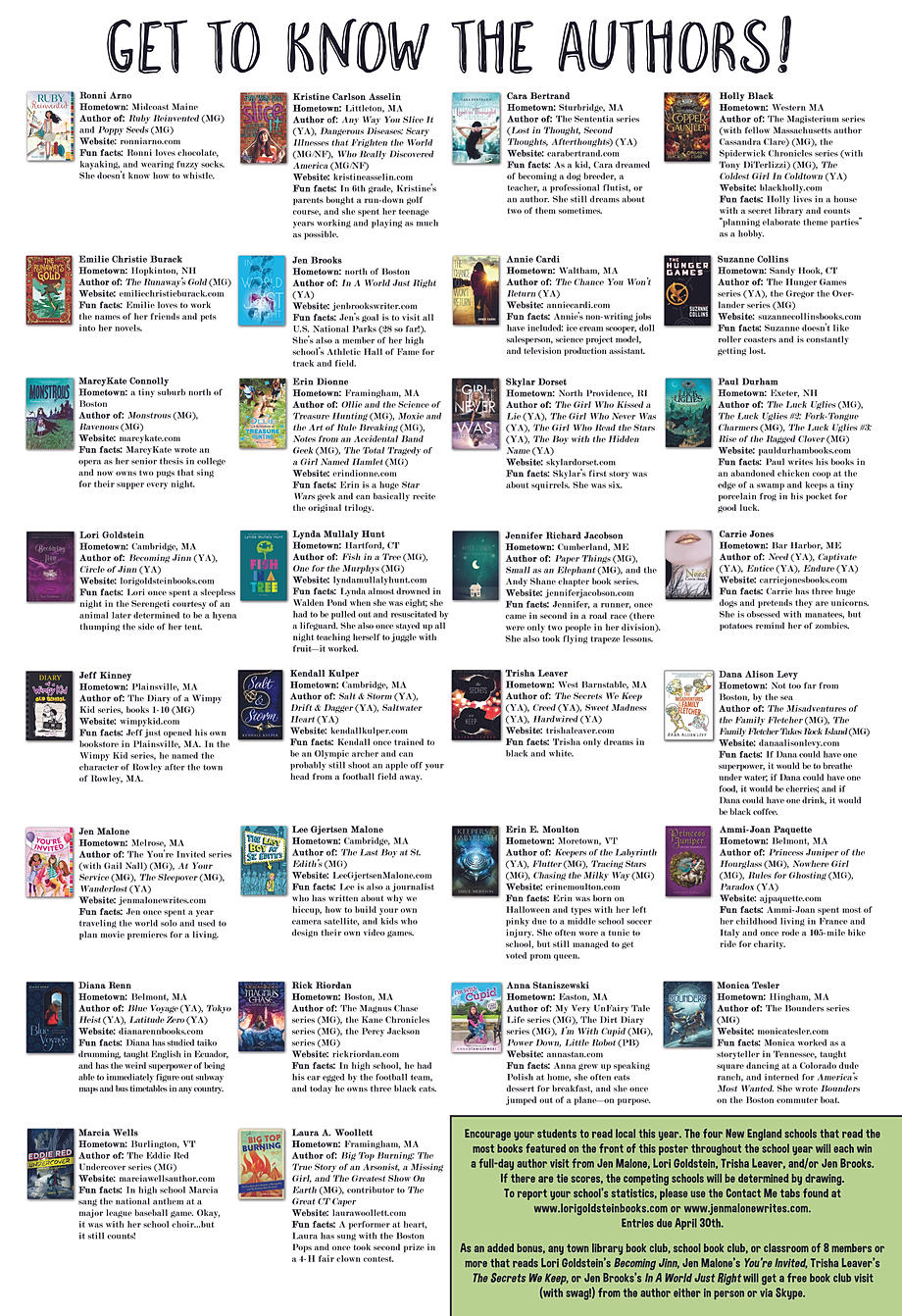 The challenge is open to any school, library, homeschool cooperative, or book club and will run throughout the 2015-16 school year. Working off the poster to the right (contact me to request a free copy by mail), groups work together to read the featured titles. Each book featured is written by an author who calls New England home and is appropriate for middle school readers. (Note: some titles are classified as Young Adult. Please contact me with any questions about possible content within a particular title.)

If at least one student in the school/library/group completes a book, mark it off on the poster. In April 2016, groups will send in their tally and we’ll award the top four groups an author visit by one of the four sponsoring authors. If more than four groups achieve the highest possible score of 30/30, we will hold a drawing to select the winning group.

How cool is that? I’m beyond excited to see The Chance You Won’t Return on the list, along with awesome books like Monstrous, Fish in a Tree, Becoming Jinn, The Hunger Games, and more.

To get started, click through, get the poster, and start reading local! I’m a sucker for YA novels that are inspired by fairy tales or folklore or mythology. Give me an old tale with a new twist and I’m there. And tales that deviate from the standard Disney princess category? Even cooler. The Fire Wish by Amber Lough involves a world of jinni and princesses and mistaken identity and it is awesome! Here are a few of my reasons why you should read The Fire Wish.

1. Najwa
Najwa’s a jinn training to be a spy–basically all worlds that are already awesome. But I also love how Najwa is sensitive and thoughtful, even when she swaps bodies with a human and has to conceal her identity to protect herself, the jinni universe, and the humans around her.

2. Zayele
In a novel with two points of view, you’d think it would be easy to forget which narrator is which. But as much as I loved Najwa, I also loved reading Zayele’s chapters. Even though she’s the human side of the story, Zayele is bold and fierce and strong, and has a deep love for her family. She makes mistakes and acts desperately at times, but her flaws round her out nicely as a character.

3. Rahela
And speaking of Zayele’s family, Rahela was a character I didn’t expect much from but I ended up loving her, too! She joins Zayele on her journey to the palace in Baghdad, and becomes a source of comfort and friendship for Najwa. Friend characters in YA without any personality irk me, and it was so refreshing to see Rahela come to life as her own character, with her own quiet strength.

4. I wish…
When you think ‘jinni,’ you probably think wishes, right? I love how Amber weaved in the classic combination of jinni and wishes into a source of mythic power and magic for this different race of people. (I love their origin story!)

5. Romance
I like my folktale adaptations with a healthy dose of romance, and The Fire Wish delivers with not one, but two adorable love interests. Swoons, guys.

6. Family
Okay, so I like complicated family situations in novels. But it was so heartwarming/heartbreaking to read about Zayele’s devotion to and guilt for her younger brother, Yashar. Also loved seeing both Zayele and Najwa’s complicated relationships with their respective parents, and what kind of expectations are placed on them as daughters. Even though there’s so much awesomeness from magic and worldbuilding here, it’s so nice to see the grounding of things like family and all that implies.

7. Cultures and history
While I love fairy tale retellings, many of them are based on European stories. It’s so refreshing to see a novel based on Middle Eastern mythology. Beyond that, Amber weaves in cultural history and social norms for characters like Zayele–she wears a hijab, prays to Allah, and generally feels like a Middle Eastern girl growing up near Baghdad centuries ago. Similarly, also cool to see a handsome prince character who isn’t white. These kinds of things matter to teen readers who don’t usually get to see characters like themselves in novels, much less exciting novels about magic and spies.

8. Page-turning
And speaking of exciting novels, this is one I couldn’t put down–danger at every turn, mistaken identity, war brewing, villains plotting, new love threatened!

9. Writing
In a novel with magic and spies and war, you’d think the writing would be adequate at best. Not so! Amber’s writing is so well crafted and lovely and connects so well with all her characters without losing any of that aforementioned action and excitement. (Seriously, Amber, are you a jinn?) I kept reading and thinking, “Oh, man, what a perfect way to put that.”

10. Amber Lough, Made of Awesome
Amber Lough is a fellow Fourteenery member, and I’m constantly in awe of her intelligence and kindness and talent and strength. She’s a master of languages, has served in the military, and writes awesome books. Keep an eye on her, folks.

The Fire Wish is now available, so go check it out at your local bookstore!

The 3rd annual Boston Teen Author Festival is tomorrow! Make sure to come by the Cambridge Public Library tomorrow for lots of writing/reading/YA goodness. I’ll be there along with over twenty other YA authors, talking about writing for teens and lots of different craft points. The general schedule:

What better way to spend your Saturday than getting to share in a day of YA awesomeness? Hope to see you there!

It’s less than two weeks to the Boston Teen Author Festival and I’m so excited!

Doors open at 10:45, and we’ll be having four amazing panels. The info has just been announced! I’ll be part of Platonic in Love: Writing strong non-romantic relationships. One of my biggest pet peeves is that YA is all about insta-love, and I’m so glad to have the opportunity to talk about other kinds of love and relationships and friendships in YA with some seriously amazing authors.

Check out the poster below for all the panel/author goodness: And click through to the Boston Teen Author Festival website for all necessary info. Hope to see you on September 27th!

Tomorrow I’ll be at Buttonwood Books in Cohasset, MA (just outside of Boston) for a panel and signing with my fellow 2014 debut YA author the lovely Skylar Dorset!

Come for the discussion about YA writing, stay for the signing and smiles.

The weather is supposed to be kind of gross, but hopefully by 7pm things will have calmed down. And what better way to spend a rainy day than by hitting up a local bookstore?

A little YA humor for your Thursday:

I have to admit, I do totally categorize people by House. (Hufflepuff pride!) I’ve also used the phrase “May the odds be ever in your favor,” in a non-YA-related professional setting.

Every so often, people write disparaging articles about YA and the adults who enjoy the category. One such article came out recently, in which the author claimed that adults should feel guilty for reading these books and that they don’t approach literature the way books for adults do. (Not going to link to said post here, because it’s click-bait-y and I don’t want to give them more traffic.)

This month at Ploughshares, I tackle the issue of YA as a literary genre and why readers shouldn’t feel guilty to reading wonderful books, no matter what their target age audience is.

Also I get to make references to both Faulkner and Mean Girls.

I’m sure all of my readers already know this, but no one should make you feel guilty for reading things you enjoy, whether that’s YA and children’s literature or graphic novels or sci-fi or romance or anything. Life’s too short to read books you don’t love.

A moving video about all libraries do for everyone in their communities:

Libraries are for everyone.

Let’s make sure our libraries get the support they deserve.