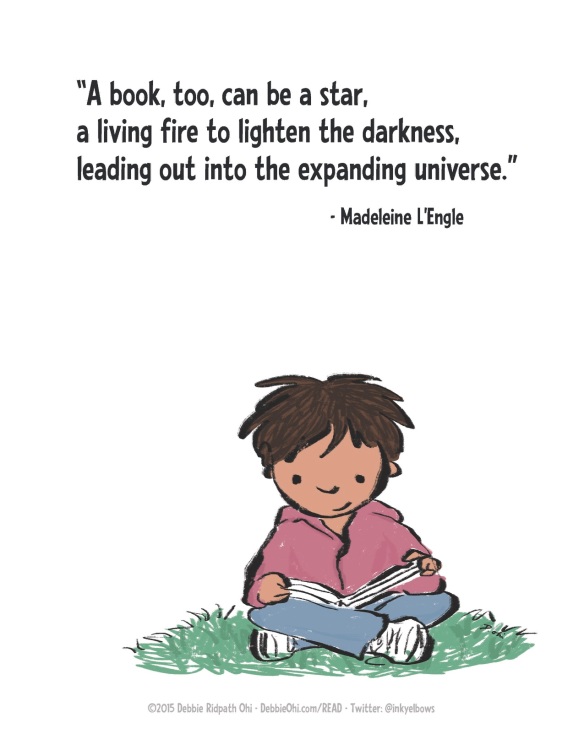 I love this illustration by Debbie Ridpath Ohi. The quote by Madeleine L’Engle seems particularly apt for Banned Books Week, as her most famous book, A Wrinkle in Time has been on banned and challenged book lists since its publication in the 1960s.

Debbie has lots of other awesome illustrations available for sharing and printing. Make sure to check out her great work and share your enthusiasm for reading!

Happy Banned Books Week, everyone! It’s a great time to celebrate freedom to read and to honor those who fight censorship. For this year’s Banned Books Week, I’m taking part in the Virtual Read-Out, which encourages readers to share a passage from a banned/challenged book. Check out my reading from In Cold Blood by Truman Capote:

There are so many wonderful books that are banned or challenged, but I chose In Cold Blood because it’s a sincerely upsetting and arresting book. Capote’s depiction of the Clutter murder doesn’t pull any punches (nor does it sensationalize), while he also portrays their killers as full people–damaged, terrifying people, but full human beings nonetheless. It’s a hard book to read, but that’s why it should be available for all readers. We can’t deny that there are truly scary things that happen in the world, and accounts like this one validate our fears and force us to confront them with empathy and thoughtfulness.

To share your own video or to see lists of banned/challenged books, check out the Banned Books Week site. Happy Banned Books Week, everyone! It’s a great time to honor the librarians, educators, and authors who stand up for books and knowledge and against prejudice and hate. Censorship doesn’t help society. Books do.

Check out Bill Moyers’ video about the importance of Banned Books Week, and then watch other famous authors and literary advocates talk about censorship and how it relates to their own work.

Also loving this fantastic timeline, 30 Years of Liberating Literature, from the ALA. It contains some fantastic information about bans on classic books, such as:

The Giver, by Lois Lowry
In 2003, “The Giver” was challenged as suggested reading for eighth-grade students in Blue Springs, MO, where parents called the book “lewd” and “twisted” and pleaded for it to be tossed out of the district. The book was reviewed by two committees and recommended for retention, but the controversy continued for more than two years. Lowry’s novel for young readers has frequently attracted objections due to its “mature themes” including suicide, sexuality, and euthanasia. “The Giver” received the Newbery Medal in 1994.

I’ve mentioned here before how much I love this book and, as a middle-schooler, I was grateful to read about these mature themes. It was the first book that really got me thinking about the value of life (all of life) and how we should function as a society. It infuriates me to think that some people want to take that away from young readers.

It’s easy to feel complacent about our overall access to books, but Banned Books Week is a great reminder that we need to appreciate the access we have and work toward giving everyone that same access. Celebrate with your favorite banned book today and all week long!