Before getting my hands on an ARC of What Ends, I’d read several incarnations of the first chapter, which I loved. No, I didn’t hack into Andrew’s computer–he and I were grad school classmates and members of the same writing group. Needless to say, having read the first chapter a few times in workshop, I had pretty high expectations for the subsequent chapters, and Andrew totally delivered. What Ends is a beautifully crafted novel about family and home and art and what ultimately connects us. Here are a few of my reasons to read What Ends. 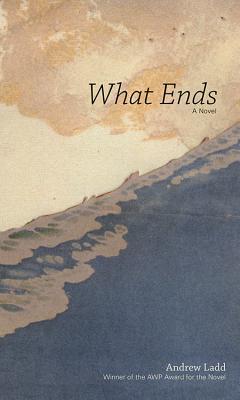 1. Island Life
The book is primarily set on Eilean Fior, a small island off the coast of Scotland. Books about life on an island always intrigue me–how do residents define themselves by their surroundings? How do they see outsiders? What’s it like to have go to school with only your sibling for a classmate? With the island’s population shrinking, the McCloud family has to face the ending of their way of life.

2. Shifting Perspectives
The novel is told in a close third-person perspective that touches on all members of the McCloud family–three children and two parents. I love that everyone gets a moment in What Ends to share their own experiences and challenges. I was especially intrigued by Maureen’s chapter, which looks at the sacrifices Maureen has made and her potential for choosing another life.

3. Let’s Do the Time Warp
Along with the shifting perspectives, What Ends also jumps around through time, during the span of about twenty years. I think this provides the narrative with a nice energy, as we get to flash between what is to come and what choices have already been made. This works particularly well between 1995 (which is focused largely on Flora) and 1988 (in which we get a closer look at Maureen).

4. First Love and Beyond
From eldest son Barry’s crush on island resident artist Bella to Flora’s relationship with mainlander Michael to Maureen’s imaginings of David to the McCloud’s marriage, Ladd creates a touching and complex portrait of love and relationships. Even when it’s painful or awkward, Ladd takes great care with his characters and their emotions.

5. Art
As a kid who was big into art, I’m a sucker for books about developing artists. I loved seeing Flora grow from a kid who spied on Bella to an artist in her own right.

6. Scotland
I loved getting a bit of an international perspective with What Ends. As a Scot himself, Ladd captures the rhythm of the Scottish dialect so well that I immediately heard the characters’ voices in my head.

7. The Writing
It would be accurate, it somewhat limiting, to describe What Ends as a quiet novel. Like most literary fiction I like, What Ends has a wonderful focus on language and connecting with characters. So often I had to stop and think, “Yes, that’s the perfect way to say it.” But ‘quiet’ can also suggest ‘not much happens,’ which doesn’t feel like the case for What Ends. The plot is quiet in that it’s very much rooted in characters’ daily interactions and struggles, but it never feels slow or plodding. I felt invested the whole way through, which is a testament to Ladd’s skill.

8. Crossover Appeal
What Ends is pretty firmly in the literary fiction category, but I think it would work extremely well for advanced teen readers and high school classrooms. Ladd expertly touches on the complications of growing up and growing away from the nuclear family unit–common themes in YA and for teen readers in general.

9. The Last Chapter
Told from George McCloud’s perspective. I don’t want to spoil anything, so let me just say: all the feels. Damn you, Ladd.

10. Andrew’s a Cool Ladd
I had to work that pun in here somewhere, right? Andrew is not only a great writer, but he’s a good friend as well. When he’s not writing heartbreaking novels about Scottish islands, he’s editing the Ploughshares blog, doing improv, working at Edinburgh Fringe Festival, and supporting fellow writers. He’s totally unassuming and unexpectedly hilarious, and I’m so happy that the world can now get to know What Ends.

What Ends is to be released on January 20, so you don’t have to wait long at all to get your hands on a copy. Pre-order now!

Happy Friday, everyone! Let’s say farewell to the polar vortex with some micro-book reviews. 1. In the Hand of Goddess (Song of the Lioness #2) by Tamora Pierce
Alanna becomes a knight, fights evil, kisses swoony guys. Maybe my favorite of the series.

2. I. by Stephen Dixon
Don’t remember much, but the depiction of his wife’s condition was striking.

3. The Littlest Dinosaurs by Bernard Most
I loved the art in this one. Tiny dinosaurs!

4. Violet & Claire by Francesca Lia Block
Liked the contrasting screenplay/poetry formats, but not one I returned to like other Block novels.

5. Picnic, Lightning by Billy Collins
The title poem is a great take on a two-word aside from Lolita.

In case you haven’t noticed by the (relative) blog silence, it’s been a crazy week for me, so I am super psyched to see that it’s Friday. Let’s get this weekend started with some book reviews in fifteen words or fewer! 1. A Heartbreaking Work of Staggering Genius by Dave Eggers
The “must read” book in college. Curious if it stands up a decade later.

2. Fairest by Gail Carson Levine
Another delightful fairy tale adaptation from Levine. Would have devoured it as a kid.

3. The Hatbox Baby by Carrie Brown Expected more baby-in-a-hatbox shenanigans, like The Importance of Being Earnest‘s perambulator.

4. The Arm of the Starfish by Madeleine L’Engle
Not the most memorable, but it’s a cool companion to A Ring of Endless Light.

5. Click Clack Moo: Cows That Type by Doreen Cronin
Do you hear the typewriters’ click? Typing the words of angry cows.

This week, Friday could not have come at a better time. Here are this week’s book reviews in fifteen words or fewer:

1. Dairy Queen by Catherine Gilbert Murdock
A lot of depth and heart in this one. Gave me Friday Night Lights feelings.

2. The Reptile Room (A Series of Unfortunate Events #2) by Lemony Snicket
One of the more formulaic, but the writing continues to be fun and propulsive.

3. A History of the World in 10½ Chapters by Julian Barnes
Collection of loosely linked stories. Well crafted and stayed with me more than I expected.

4. The Tale of Despereaux by Kate DiCamillo
I wish all mice cared about chivalry. Charming kind of Don Quixote for kids.

5. Frog and Toad Are Friends by Arnold Lobel
Frankly, I thought Frog could do a little better.

Happy Friday, guys! Let’s get the weekend started with some good ol’ book reviews in fifteen words or fewer. 1. Meet Kirsten: An American Girl (American Girls: Kirsten #1) by Janet Beeler Shaw
Great look at the immigrant experience for kids. Probably teared up at this one.

2. Just One Day by Gayle Forman
Made me want to visit Paris and reread As You Like It. Dee’s my favorite.

3. American Pastoral by Philip Roth
I liked the initial concept, but didn’t hold together for me character-wise.

5. The Emperor’s New Clothes by Hans Christian Andersen
As a child concerned about clothes, a king walking naked down the street was puzzling.

Happy Friday, everyone! It’s starting to feel like fall, and I couldn’t be happier about it. Other things I’m happy about? Book reviews in fifteen words or less. Onto the reviews! 1. Three Junes by Julia Glass
Clear, elegant prose. The second June, from Fenno’s POV, stayed with me most.

2. Criss Cross by Lynne Rae Perkins
Quiet, lovely writing. Expected something different, but would like to reread.

3. Much Ado About Nothing by William Shakespeare
Beatrice and Benedict might be Shakespeare’s best couple. “Another Hero!” line is a clunker.

4. Felicity Learns a Lesson (American Girls: Felicity #2) by Valerie Tripp
I still think about Felicity when I say no to more coffee/tea.

5. The Little House by Virginia Lee Burton
The costs of urbanization as only Burton can tell it. Great illustrations, of course.

Happy Labor Day weekend! Let’s kick off the long weekend with a few book reviews in fifteen words or less: Black Beauty by Anna Sewell
The closest I got to going through a horse-book phase.

Danny and the Dinosaur by Syd Hoff
Somehow the dinosaurs at the museum never talk to and come home with me.

Poetics by Aristotle, translated by Malcolm Heath
The original discussion about writing and art. Would like to reread selections.

Ruby by Francesca Lia Block
Magic + fangirl. Stayed with me, but didn’t hold together as well as I wanted.

I am so ready for Friday. Let’s get the weekend started with some good ol’ fifteen-word (or fewer) reviews: 1. The Thief Lord by Cornelia Funke
Funke makes Venice so magical. Ending didn’t quite match the beginning for me.

2. Aristotle and Dante Discover the Secrets of the Universe by Benjamin Alire Sáenz
Really enjoyed Ari’s voice and the role parents played. Gentler than I expected.

3.  Warriors Don’t Cry: The Searing Memoir of the Battle to Integrate Little Rock’s Central High by Melba Pattillo Beals
Harrowing story of the Little Rock 9. File under “bravest teens ever.”

4. After the Quake by Haruki Murakami
Like the unsettling vibe in each, but I was expecting something odder overall.

5. One Morning in Maine by Robert McCloskey
A loose tooth and clam chowder? This book reminds me of a cozy fall morning.

Happy Friday, everyone! Let’s kick the weekend off with a few book reviews in fifteen words or fewer. 1. Lemony Snicket: The Unauthorized Autobiography by Lemony Snicket
A fun addition to the series; can’t remember if it illuminated any of the mysteries.

2. Where the Wild Things Are by Maurice Sendak
The art is gorgeous, but I always thought Max was kind of a dick.

3. Shiver by Maggie Stiefvater
I avoided this one for a while because I eye-rolled a werewolf romance. What was I thinking?!

4. Gone Girl by Gillian Flynn
Maybe my expectations were too high, but I thought the “twist” was a given.

5. The Snapper by Roddy Doyle
Love the Rabbitte family. Sharon shines here, and Doyle doesn’t shy away from hard issues.

Happy Friday, everyone! Somehow it feels like a surprise this week, like my brain is still on Thursday. But I’m all too happy for it to be Friday and to be sharing this week’s roundup of book reviews in fifteen words or less. 1. Anne of Green Gables by L.M. Montgomery
As a redheaded Anne, I so connect to this book. Plus Matthew makes me cry.

2. The Devil in Massachusetts by Marion Lena Starkey
Read for a 7th grade history report. Not sure if it’s entirely historically accurate.

4. Girl with a Pearl Earring by Tracy Chevalier
Dug it more than I expected to. Vivid portrayal of life in 17th century Holland.

5. Ronald Morgan Goes to Bat by Patricia Reilly Giff
Could understand not being a natural athlete; the ice cream scene particularly appealed to me.