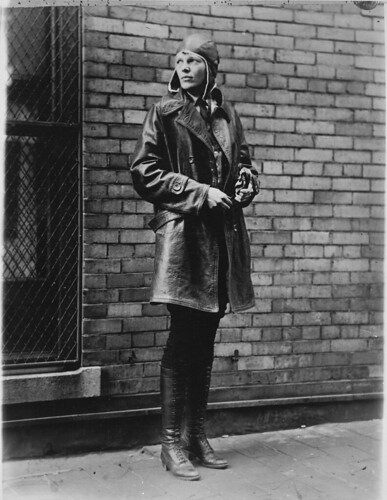 Today is International Women’s Day and considering female pioneer of aviation Amelia Earhart plays into my novel in a big way, it seems like a fantastic day for a giveaway. First, a few cool facts about the famous aviatrix:

Want more historical trivia about Amelia Earhart (plus some family drama, driver’s ed, mental health, and kissing)? Enter this giveaway to win a signed copy of The Chance You Won’t Return! Entries are open until March 15.

Want bonus points? Share your favorite female historical figure (or figures, there are a lot of great ladies to choose from) in the comments!

Happy Friday, everyone! Somehow it’s the last Friday in August, which means I want to soak up every possible second of summer before it’s over. Let’s get the weekend started with a look at what I’ve been reading and writing in fifteen words or fewer.

Reading: The Family Romanov: Murder, Rebellion, and the Fall of Imperial Russia by Candace Fleming
Like reading about the people in the Capitol in The Hunger Games, but real.

Writing: “…no one drinks if they don’t want to. Peer pressure is for the lacrosse team.”
Team rules.

Photograph showing Amelia Earhart sitting in the cockpit of an Electra airplane. (via Wikicommons)

Happy birthday, Amelia Earhart! Today would have been the famous pilot’s 118th birthday. Despite having been born over a hundred years ago and having disappeared over the Pacific seventy-eight years ago, she still fascinates and inspires the public. And, obviously, her presence and history are a big part of The Chance You Won’t Return.

What better way to celebrate Amelia Earhart’s birthday than to host a giveaway?

Enter the Rafflecopter below to win a signed copy of The Chance You Won’t Return, plus some book swag and a few extra goodies. For extra entries, follow me on Facebook and Twitter, tweet with the hashtag #TCYWRgiveaway, and comment below about where you’d go if you could travel anywhere.

Note: Giveaway for US residents only. I love international readers, but postal is expensive.

Some fun Amelia Earhart news for the week! A film of Amelia Earhart, taken just before her final attempted flight around the world, surfaced recently after sitting on a shelf for fifty years.

In 1937, Earhart was preparing for a flight around the world. Photographer Al Bresnik went to take pictures of Earhart at Burbank Airport, and his brother, John, joined him. Unbeknownst to anyone, John took a short film of Earhart, and his son discovered the contents of the film decades later. Check out some of the footage in the Associated Press clip below:

It’s unclear whether this footage was taken before her first attempt or second attempt, but either way it’s a look at Earhart within a year of her disappearance over the Pacific.

It doesn’t add a lot to Earhart’s history or clear up any details of her disappearance, but for me it’s a reminder that the public is still interested in her life and her story. Learning about her during the research process for The Chance You Won’t Return was awesome, and i loved realizing why Alex’s mom connected to Earhart so deeply. Even these little glimpses of her feel like they give us a clearer picture into who Earhart was and where she went. Happy Fourth of July, everyone! One reason I like living in New England is that Revolutionary War history is all around. From the Old North Bridge in Concord, to the Granary Burying Ground on Tremont Street, to the Bunker Hill Monument, the American revolution still feels very much like a part of the area.

Me at the Old North Bridge.

Also, one of my favorite things is to see historical re-enactors/tour leaders shopping for groceries or riding the T in colonial garb. History lives!

Maybe you don’t live in a city featuring tour guides in historical garb. Fear not! In case you’re looking to add a little Revolutionary War-era historical children’s/YA literature to your Independence Day, I’ve got a few suggestions:

The Midnight Ride of Paul Revere by Henry Wadsworth Longfellow
My mom read this poem aloud to my brother and me when I was around seven or eight. It’s not exactly historically accurate (sorry, William Dawes!), but it’s a fun way to introduce kids to an exciting night in American history.

The Astonishing Life of Octavian Nothing, Traitor to the Nation, Volume I: The Pox Party and Volume II: The Kingdom on the Waves by M.T. Anderson
The Octavian Nothing series is one I recommend to people who assume that YA is all about vampires and fluffy crushes. Anderson’s writing is stunning, and his story about a slave boy/social experiment who gets caught up in the Revolutionary War is brilliant. Not your typical look at the American Revolution, obviously, but an essential one.

Others to check out:

Hope you all have a happy Fourth of July!

Of course now I want indie bio-songs for all the classic authors.

This week is the national Days of Remembrance, which commemorates Holocaust victims and survivors. I remember learning about the Holocaust in school, primarily with two main books. The first was Number the Stars by Lois Lowry, which my class read in third or fourth grade. I knew about WWII in general, but this was the first time I remembered hearing about the significant threat to Jewish people during that time. The book provided a safe way to learn about a very scary part of history; the threat to Ellen’s family is very real but Lowry is careful not to go into too much detail about what could have faced the Rosens if they’d been caught.

Night by Elie Wiesel was another significant book in my learning about the Holocaust. By the time I read it, I was in eighth grade and knew millions of innocent people had been tortured and killed. I didn’t expect Night to affect me so, but I read it in one evening and spent the entire time crying. For me, it was an opportunity to understand the Holocaust in a very personal way. Somehow it’s easy to gloss over statistics about how many people died; it’s far harder to ignore real stories about the horrors that individual people experienced.

Which is why the Days of Remembrance and honoring all the specific victims and survivors are essential. We need to hear their stories and remember that these were/are specific people with specific lives. They were mothers and singers and readers and kids who liked silly jokes and lawyers and on and on. All of their stories are valuable and need to be shared.

The United States Holocaust Memorial Museum has resources for taking part in the Days of Remembrance, including a webcast of the national ceremony on Thursday, April 11 at 11:00am. In case you can’t take part in an organized event, you can also share the stories of victims and listen to the stories of survivors, as documented on the museum website. Make sure their voices are heard.

Happy belated St. Patrick’s day, everyone! Last night we watched The Secret of Kells, which is such a gorgeous movie, and reminded me of this lovely poem about a writer and his cat. Here’s one famous translation by Robin Flower:

The scholar and his cat, Pangur Bán
(from the Irish by Robin Flower)

I and Pangur Ban my cat,
‘Tis a like task we are at:
Hunting mice is his delight,
Hunting words I sit all night.

Better far than praise of men
‘Tis to sit with book and pen;
Pangur bears me no ill-will,
He too plies his simple skill.

‘Tis a merry task to see
At our tasks how glad are we,
When at home we sit and find
Entertainment to our mind.

Oftentimes a mouse will stray
In the hero Pangur’s way;
Oftentimes my keen thought set
Takes a meaning in its net.

When a mouse darts from its den,
O how glad is Pangur then!
O what gladness do I prove
When I solve the doubts I love!

So in peace our task we ply,
Pangur Ban, my cat, and I;
In our arts we find our bliss,
I have mine and he has his.

Practice every day has made
Pangur perfect in his trade;
I get wisdom day and night
Turning darkness into light.

I love this comparison between a cat at hunt and a writer at work, especially that last stanza. Check out a few other translations as well. There’s a Book Thief movie in the works? And it’s going to star Geoffrey Rush as Hans Hubermann? So. Freaking. Excited.

Emily Watson (no, not Emma Watson, I had to read that twice) is slated to play Rosa Hubermann and Sophie Nelisse is Liesel. I haven’t seen either of them in films before, but I’m very hopeful for this cast.

The Book Thief is one of the perfect recommendations for someone who looks down on YA as a genre. I hope a movie version captures the complexity of the novel and introduces it to a wider audience. Also, really curious to see how they handle Death’s voice throughout.